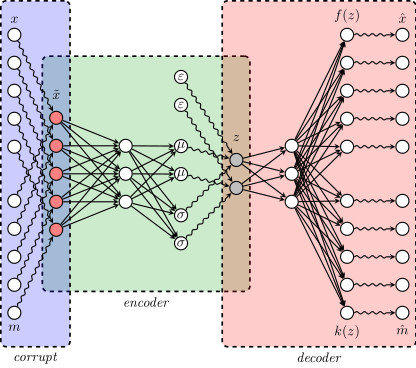 This is a project in collaboration with Jill-Jênn Vie from Inria-Lille, France.

For example, if $x$ is an observation of a Bernoulli distribution we could choose $L(x,f(z))$ as the loglikelihood, where $f(z)$ is the parameter of such distribution, that is

To illustrate this, we consider the MNIST data set, which consist of images of hand-written numbers. The original value of the pixels in each image is between 0 and 1, but we have binarized it, assigning 1 if the value of the pixel is bigger or ueal 0.5 and assigning 0 otherwise. Thus, we can apply the Bernoulli loglikelihood for each pixel. Each image is a 28x28 pixels (thus each image has 784 pixels).The encoder-decoder structure is symmetric, where $g$ and $f$ are multilayer perceptrons, $g$ has two hidden layers of 392 and 192 neurons each layer, and ReLu activation function. The last layer of the decoder has 784 neurons and sigmoid activation function. The latent layer ($z$), has no activation function and we vary the number of nuerons (that is, the dimension of the latent space) in our experiments to be 2 or 98, we denote the dimension of the latent space as $d$.

The next figure shows the structure of our autoencoder. We have preserved this same structure in all our experiments.

A good introduction to VAEs can be found here