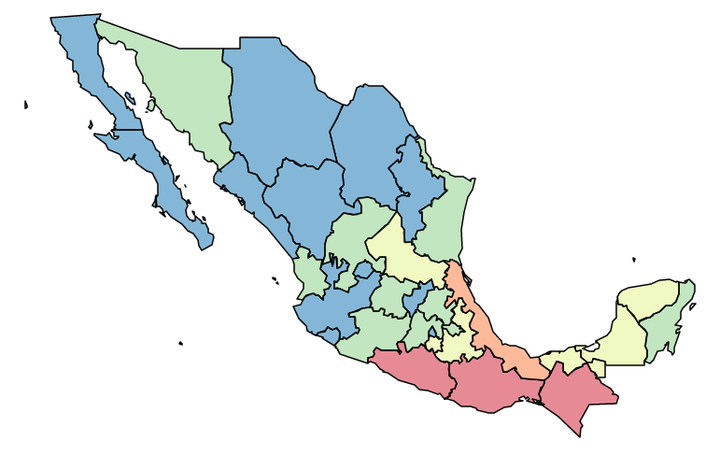 This is an analysis of the Coneval’s data for the measurement of poverty in Mexico in 2018, the data are free and can be found in https://www.coneval.org.mx/Medicion/MP/Paginas/Programas_BD_08_10_12_14_16_18.aspx.

Before the arrival of the modern Multidimensional Poverty Index, the poverty was measured through the Human Poverty Index (HPI), as a complement of the Human Development Index (HDI) and was first introduced in 1997. This index is was actually two different indexes, the HPI-1 for developing countries and HPI-2 for high-income OECD countries (https://en.wikipedia.org/wiki/Human_Poverty_Index).

The HPI-1 is given by the formula:

The HPI-2 is given by the formula:

In 2010 the methodologies to calculate the HDI and to measure the poverty changed, and the Multidimensional Poverty Index was introduced, being Mexico pioneer in the development of the methodology for the last one. These methodology was developed by the Consejo Nacional de Evaluación de la Política de Desarrollo Social (Coneval) (National Council for the Evaluation of Social Development Policy) which is an autonomous institution that attempts to evaluate the social-political situation of Mexico and measured the poverty in the country.

History of the Multidimensional Poverty Index in Mexico

An detailed story of the development of the Multidimensional Poverty Index can be found in https://www.coneval.org.mx/Medicion/MP/Documents/Como_logro_construir_la_medicion_de_Coneval%20(1).pdf. Here, I just present a resume.

Poverty indicators where published in 2002 and 2004 by the Federal Government. However, there was general distrust in the statistics published by the government. This distrust motivated the creation of the Coneval as a public and autonomous institution, starting its operations in 2006. For the next three years the Coneval created a theoretical.methodological framework to established the criteria for the definition, identification and measurement of the poverty from a multidimensional perspective, using information generated by the Instituto Nacional de Estadística y Geografía (INEGI) (National Institute of Statistics and Geography) through the Módulo de Condiciones Socioeconómicas (MCS) (Module of SocioeconomicsConditions) de la Encuesta Ncional de Ingresos y Gastos de los Hogares (ENIGH) (National Survey of Home’s Incomes and Expenses), introduced in 2008 and allowing the computation of Multidimentional Poverty Index in the same year. This survey has a periodicity of two years for each state and with information for each municipality every five years.

The construction of the methodology was done with the cooperation of national and foreign researchers and institutions, an extensive list can be found in https://www.coneval.org.mx/Medicion/MP/Documents/Como_logro_construir_la_medicion_de_Coneval%20(1).pdf, some of the institutions that participated are those presented in the next figure, which I took from the same source.

As a result of all the described efforts, the Coneval elaborated the “Medología para la medición multidimencional en México” (“Methodology for the multidimensional measurement in Mexico”), whose third edition can be found in https://www.coneval.org.mx/InformesPublicaciones/InformesPublicaciones/Documents/Metodologia-medicion-multidimensional-3er-edicion.pdf . I personally find this document really well-written, including 4 appendices explaining the statistical methodology to calculate all the indexes and statistics used in the study.

Other countries like Colombia, Chile, Philippines, Bhutan, Morocco, Algeria, Tunes, South Africa, England and Peru have implemented their multidimensional poverty index based on the methodology developed in Mexico. And, like I said this methodology is the official one in the UN since 2010, with Mexico being the first country to implement it.

Here I present my own analysis of the Coneval’s data for the measurement of poverty in Mexico in 2018, the data are free and can be found in https://www.coneval.org.mx/Medicion/MP/Paginas/Programas_BD_08_10_12_14_16_18.aspx. Note that this is not the methodology used by the Coneval to calculate the multidimensional poverty index.

I am going to focus just on 10 indicators available in the data set, and I’ll do the analysis at a state level. These indicators can be divided in two categories:

For these indicators, it is used the income per capita and the prices of basic food to generate two thresholds:

Other variables, that I do not include in this analysis are related with the inequality in a society and correspond to a third category of variables. Two of these variables (among others) are:

By the way, based on the on the poverty line income and the privation indicators, it is possible to make the following graph, classifying the people in four different categories.

The autoencoder (AE) and the construction of a poverty index

To begin the analysis I consider the average for over each variable for each state in Mexico. So each state is represented by a 10-dimensional vector representing the percentage of population that satisfies the definition of the variable. Together with the states of Mexico, I created two hypothetical entities named “Dystopia” and “Utopia”. Dystopia would be a place where no one has basic education, access to health services, social security, etc. and where everybody’s income is below the extreme poverty line. On the other hand, Utopia is a place where everybody enjoys all the social rights and where no one lives below the poverty line by income.

With this data I trained an autoencoder with the following architecture:

In this graph I have taken the values of dystopia and utopia to build the color gradient, showing the condition of every state in comparison to the worst and best scenarios.

A map of Mexico showing the AE poverty index, where the color gradient is based on utopia and utopia can be found here: Map of poverty in_Mexico, colors considering Dystopia and Utopia.

In this second graph I have used the AE poverty index of the states to create the color gradient, which allows a better comparison of the inequality between states.

A map of Mexico showing the AE poverty index, where the color gradient is based on the Mexican statets can be found here: Map of poverty in_Mexico, colors considering just Mexico.

Use of PCA to explain the poverty index

The problem on the use of may machine learning algorithms like neural networks is their black-box flavor. In this case, for example, we cannot extract a direct interpretation of the AE poverty index even while it follows the common sense. In an attempt to give some interpretation to this index I decided to do a PCA on the 10-dimensional vectors that represent each state, and decided to use the first two principal components to show a linear representation of the observations.

Taking advantage of the loads used to construct each component we can create a biplot, which might give some interpretation to the index. We can see that the first principal component is a weighted mean of the variables with the variable “Access to basic services at home” has the largest weight/load. Since the principal components try to find the directions of maximum variation in the data, this might suggest that the principal inequality between states is the access to basic services at home. On the other hand the indicator “Access to health services” is the variable with the lowest weight/load suggesting that most of the states have a similar value for this variable.